A powerful build for the Dark Moon Greatsword

This build is based on the weapon skill: Moonlight Greatsword, for a slow attack with high damage.
Recommended level this build is 150+First off we need to understand the nature of the weapon skill, Moonlight greatsword is a Glintstone sorcery, charged skill with held heavy attack as such there are several ways to buff this weapon.

The primary use of this shield is going to be its skill contagious Fury which is going to buff all damage we deal by 20% for 30 seconds.

The Jellyfish Shield Shield can be found at the following location:

On a broken wagon next to a corpse surrounded by four Jellyfish directly north of the Foot of the Four Belfries Site of Grace.

This armor set is going to grant us 10%(2% for each piece) increase on magic and cold weapon skills.

The Spellblade’s set is looteable from sorcerer Rogier after completing his quest and reloading roundtable hold.

Shard of Alexander drops from Iron Fist Alexander after completing his quest and dealing a killing blow.

Obtained by giving Preceptor Seluvis (Seluvis Rise) the Amber Starlight after Seluvis tells you about his scheme.

Drops from Godfrey the Grafted found in Golden Lineage Evergaol.

Located in Lux Ruins, in a chest after defeating the boss, Demi-Human Queen Gilika

The form of attack is quite simple.

To hit maximum damage at the expense of mobility you can use Terra Magica for 35% damage bonus. 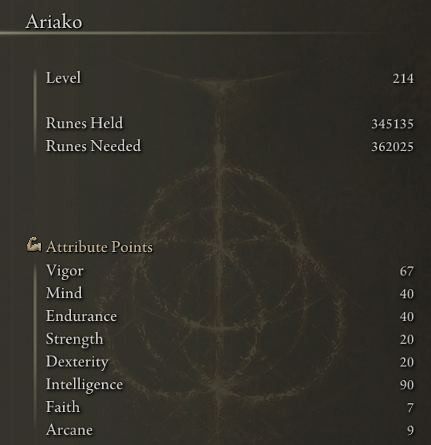 try off to soft cap (80) intelligence first and set points towards vigor / endurance depending on your play style and reaction times.

This guide is based on RageGamingVideos guide: