Short, sweet and simple guide to cheesing the ELF out of a fight in Act 2 to farm infinite foils. If you’re a completionist or achievement hunter like me, this will allow you to get every. single. for purchase. card in Act 2.

Edit: I realized shortly after publishing this that there are other guides that achieve the same result, this guide reflects my own discoveries and also the refined process that, imo, is the most streamlined you can get given the necro’s boosting your gains by 4 times. Not going to say other guides aren’t viable. Just keeping this up in case you don’t want to rely on the ones listed. All strats that get you such an OP card are viable imo. Hope it helps!

To get started there are a few things you need ahead of time, keep in mind that these are minimum requirements more is better because that helps ensure you can pull what you need:

It’s worth it to note that it is beneficial to have 2 necromancers on the board after you have your ouroboros and at least one low cost/no cost trash card to sacrifice. Also, if you have more than 2 cats, the more the merrier as that’s the limit to how long you can do this in one run, thus boosting Ouroboros further faster (which is also why it’s beneficial to have 2 necromancer’s on the board).

In short, your task is to pump Ouroboros up as high as you can so you can one shot the training dummy battle. The training dummy is on the second floor of the mage tower and is the only repeatable battle in act 2. Your task is to sacrifice Ouroboros repeatedly to pump it up as much as possible with each battle until it’s as strong as you want. Setting this up now will make Ourobot super strong in Act 3 to help farm robobucks there and to gain a few achievements like 666 and killing a 3 star enemy. Only downside to this is that if you go at it as much as I did you’re going to be sitting a while on victory screens. More on this in the next section.

So, there’s the overview, here’s the in depth with pointers I learned to help streamline the process:

1. Use 8 foils to buy Ouroboros from the merchant in Leshy’s cabin ASAP.

2. Go through the story making sure that, if possible, you’re snagging cats and necromancers along the way. Make sure that by the time you finish Grimora’s area you have at minimum 1 but preferably 2 or more Necromancers and as many cats as you can spare, acquire or buy some 1 or 0 blood trash mobs along the way, they will be needed to set things up as you want to limit the use of cat to ouroboros as, it’s not unlimited sacrifices despite the sigil for it having the mobius strip, it’s 9 lives per cat.

3. Once you have gone through to the second floor of the mages tower, look to the north of the puzzle pillar in the middle, there will be a training dummy there. This is why we’re here. It’s the only repeatable battle in the entire Act.

Note: There is an element of RNG to this, you’re turn limited to the amount of cards you have, if you draw your last card a new set of cards start appearing that damage you called starvation or something. If you get to this point kill it then or surrender to start a new battle. No biggie though, you don’t have to worry about permadeath if you lose, it’s just annoying when you’re in the midst of this strat since you’ll be seeing this battle repeatedly. 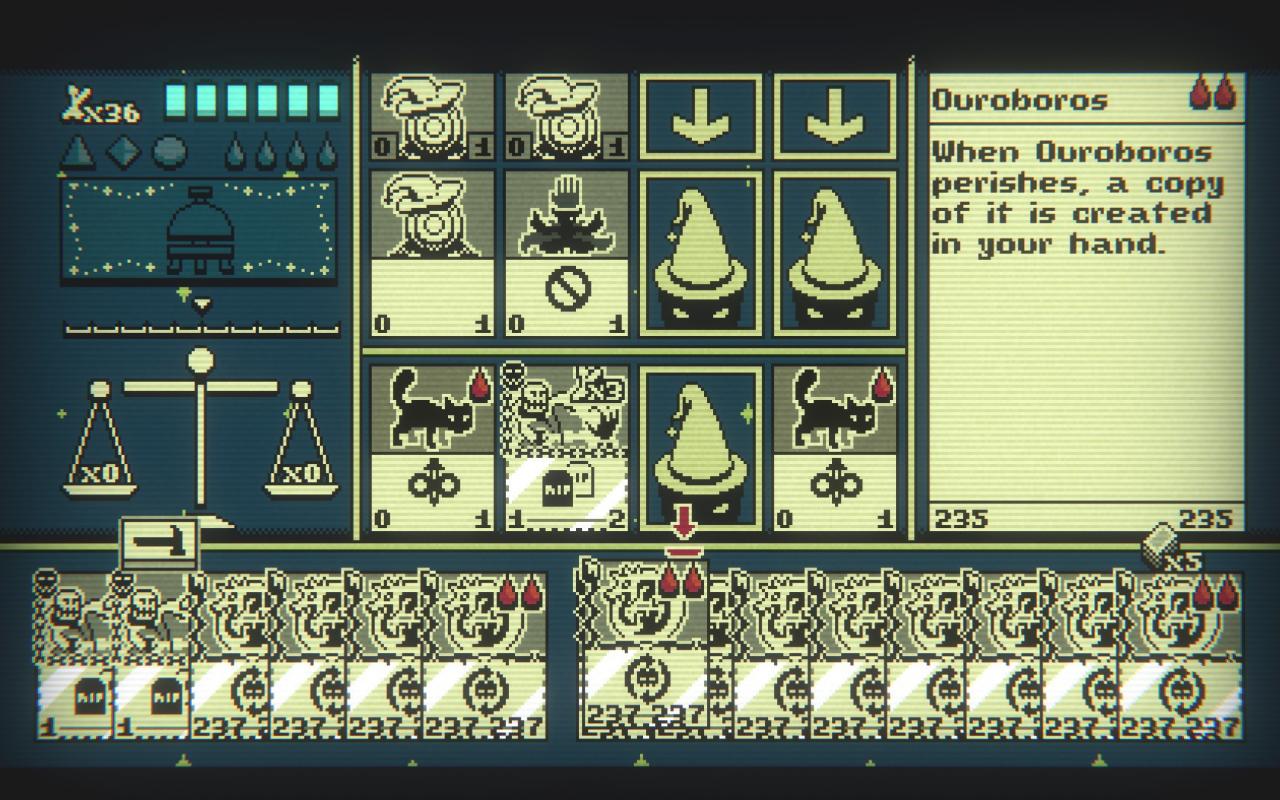 Cat to the left, necro in under the force mage which cancels out attacks so it doesn’t damage the dummy and the third or fourth for Ouroboros.

8. Once the first Ouro is dropped, use that handy dandy hammer below the bell to destroy your Ouro. This procs Ouro’s undying and death buff, and with necro it procs those abilities twice which in turn makes you have 2 ouro’s in your hand.

9. You are now set up for an almost infinite turn. Now that you have 2 Ouro’s in your hand, sac the cat and the final trash mob to drop 1 Ouro on the board, if you have a second necro drop it to the right most square which makes the Ouro proc its ability 4 times versus 2 hence making this process even quicker.

10. Sac the cat and Ouro to drop the second Ouro. Keep doing this until the cat has red tears, at this point if you have another cat like I suggested, sac the red teared cat for the new one and continue the process until your last cat is red teared. At this point sacrifice the cat and Ouro to drop one Ouro and sac the 2 necro’s to drop a 2nd Ouro in the right most square. 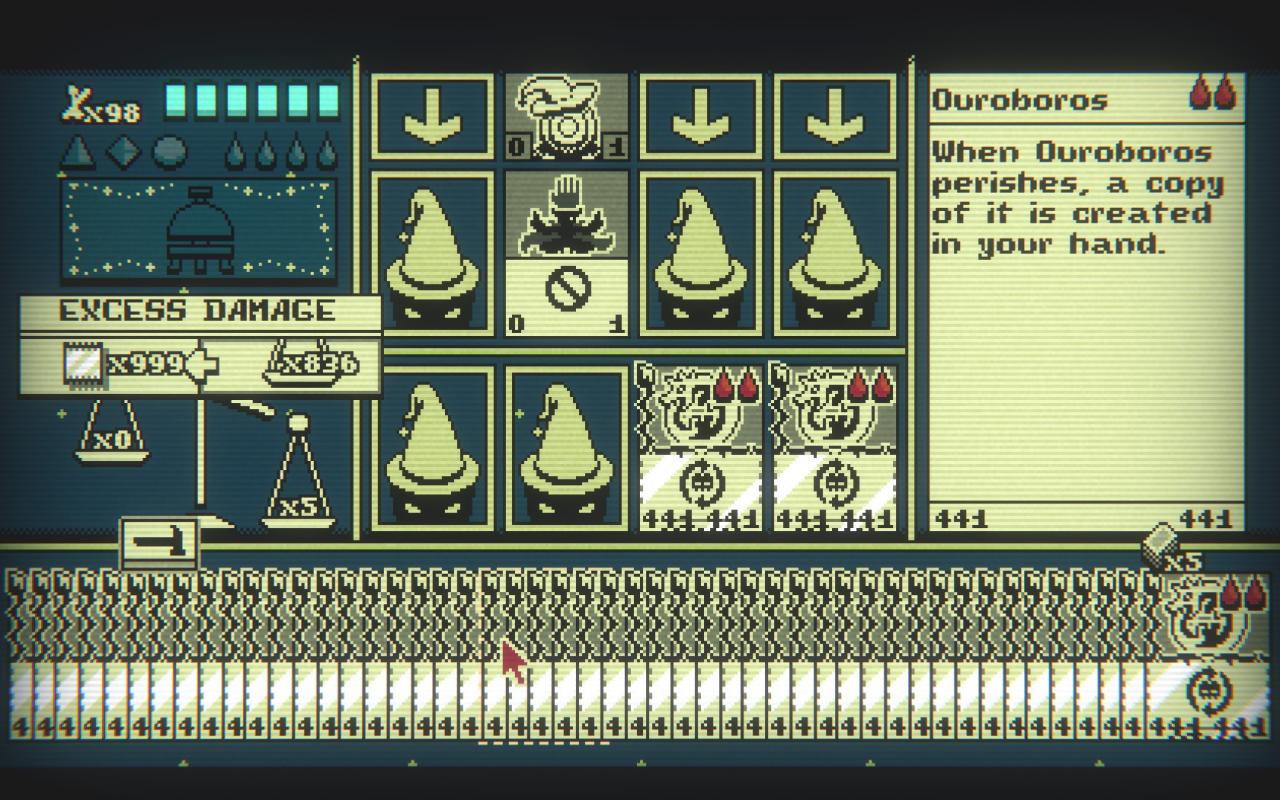 11. End turn to OHK the dummy and rake in all the foils… this will take time once your Ouro’s are up to 100 plus attack.

13. After you’ve amassed the insane amount of foils, if you’re doing this for the achievements here’re my tips:

As an aside, the in game visual cap for foils is 999. I think this is more a cosmetic to fit the old low item caps that were common in video games due to tech limitations as I can confirm that even when it goes to 999, you’ll still be getting foils past 999. Keep in mind that you can redo this battle as much as you want even if you proceed with the story and beat the boss at the top of the tower.

Well, that’s it! Have fun getting your Ouro OP as hell so that it can OHK a 3 star bounty hunter in act 3! Mine is at 489/489 currently with poison, bifurication (sp?) and the sniper skill for 2 attacks to whatever I want. You might be thinkin the poison is useless on something with that much attack… nah… it’s overkill and that’s what I’m about.

Speaking of Act 3, you can absolutely farm tons of robobucks, keep in mind, though, that the more cards you buy there, the harder it is to pull Ouro in 6 turns as you don’t get to build a deck out of what you have like in Act 2.