Every ghost has a special behavior that can manifest itself directly. These will help you quite a lot in the nightmare game mode.

Spirit
When you use the Smudge Stick next to the Spirits, it can’t initiate a hunt for a longer period of time than other ghosts.
Wraith
Wraith can suddenly teleport to your side when not hunting. At such a moment, the EMF may show 2 or 5. In cases where you are sure that an object is not being thrown around you or you are not experiencing any other activity, the Wraith will give itself away.

Wraith also do not leave a footprint visible with UV Light when they step on a salt.

Phantom
Taking a picture of Phantom during a ghost event will cause the ghost event to end and he will disappear.

Phantom chooses a random player and goes to his location. This will generate an EMF Level 2 reading all over the location before the incident happened.

In addition, during the hunt, Phantom becomes invisible for a much longer time than other ghosts. Phantom will flash visible every 1 to 2 seconds, as opposed to every 0.3 to 1 second for other ghosts.

In addition, looking at it lowers your sanity by 0.5% per second.

Poltergeist
Poltergeist sometimes throws more than one item at the same time. This will reduce the sanity of all players nearby multiplied by 2% by the number of items thrown.

Poltergeist has the possibility of throwing items much more often than other ghosts.

Banshee
At the beginning of the game, Banshee chooses someone as a target.

Banshee will only control the sanity of their target while trying to initiate a hunt instead of the average sanity of the team. Banshee does not kill players who do not have a target during the hunt and does not try to chase them. Smudge Sticks also work on players who do not have target, but do not complete the task “repel the ghost with Smudge Sticks while chasing someone”.

If the target is not in the house, then he hunts normally.

Banshee will sometimes use his ability to walk to the location of his target. This is similar to the Phantom‘s ability.

Banshee creates an event in which sings more than other ghosts. If you get too close to him and make him disappear during an event where he is singing, your sanity drain drops by 15% instead of 10%.

When a Parabolic Microphone is used, the Banshee has a chance to make a unique scream-like paranormal sound.

Jinn
During a hunt, if the Jinn detect a player, they will go to them at a higher speed of 2.5 m/s until they are at a distance of 3 meters from the player. They will then follow the player at the standard ghost speed.

If the fuse box is open, it creates an EMF reading of 2 or 5 levels on the fuse box and reduces the sanity drain of all nearby players by 25%.

Revenant
If the Revenant does not see someone during the hunt, it will move slowly (1 m/s). If Revenant saw someone and started chasing him, his speed increases a lot (3 m/s).
Shade
Shade can initiate hunt on very low (average 35%) sanity drain.

In general, it interacts much less.

If there are more than one person in the room, Shade is almost unable to interact and initiate hunt.

While your average sanity drain is 100%, all ghost attempts fail. Every time your sanity drain drops by 1%, the chance of succeeding in an activity attempt increases by 2%. So when you get down to 50% sanity drain, Shade will be successful in all his attempts.

Shade usually prefers to whisper in your ear as an activity and often appears in a shadow or transparent way during event. This can be detected more easily using the summoning circle and music box.

Demon
Demon can be hunted at very high sanity drain (70%).

Demon also has the ability to launch a hunt without regard for sanity drain. Starting from his room, he walks towards a random player and starts a hunt if Demon sees that player within 20 seconds.

Cooldown time between hunts is 20 seconds instead of 25 seconds.

The Smudge Stick prevents him from launching a hunt for only 60 seconds instead of 90 seconds.

The range of crucifix is 5 meters instead of 3.

Yurei
Yurei can close the doors completely and quickly. The sound of the door closing is heard with a delay. Meanwhile, it reduces the sanity drain of players within 7.5 meters by 15%.
He is also the only ghost who can interact with the entrance door.

When smudge sticks are used on the Yurei, in addition to preventing hunts and increasing activity, it will not leave the room that it is currently in for 90 seconds. So if he activates a motion sensor outside the ghost room after using the smudge stick, it proves that he is not Yurei.

Yokai
If you talk next to Yokai, can start a hunt in 80% average sanity drain. The normal is 50%.

During hunts, a Yokai can only hear players or sense active electronics that are within 2 meters of it. 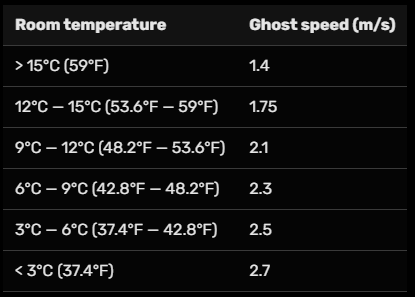 During the hunt there is a speed of movement, which is affected by the temperature of the rooms.

The chances of closing the fuse box are twice.

He cannot accelerate while chasing someone during the hunt.

It can give freezing breath in very cold rooms.

Goryo
Goryo will only interact with a D.O.T.S. Projector if no players are nearby. D.O.T.S. silhouette is only visible through a Video Camera.
Raiju
It acts on electronic devices within 15 meters instead of 10 during a ghost event or hunting.

The hunting sanity threshold of the Raiju rises to 65% when it stay near at least one active electronic equipment (Normally 50%).

During the hunt, they move at a speed of 2.5 m/s when passing near active electronic equipman.

The distance of the movement speed enhancement given by active electronic items:

Electronic items that your ability does not work:

Myling
More often than other ghosts, Myling makes paranormal sounds that can be heard with a Parabolic Microphone.

While hunting, the sound of footsteps can be heard within the same distance as the electronic devices in your hand start to break down. For example, when your flashlight starts flashing when there is no sound, you start to heard get a muffled footsteps. As it gets closer, it also begins to be heard clearly.

Onryo
Onryo can hunt on the threshold of 60% sanity drain.

Onryo can blow out the candles with a higher chance.

When Onryo blow out a candle or lighter, he can start a hunt with a 50% chance (Your sanity drain is unimportant.)

When Onryo starts a normal hunt near a candle, he blow out the candle and gets a 50% chance to repeat hunt again. If there are no other candles around and it succeeds, the whole hunt is repeated.

This 50% chance increases by another 25% each time the player dies. In other words, when 2 players die, the hunt starts every time the candle goes out. (Onryo cannot start hunting when the first 3 candles are blow out.)

At the same time, each candle serves as a crucifix. When they try to hunting within 4 meters, they fail and blow on the candle instead.

Twins
Twins are very active. It can interact in different rooms at the same time.

Twins can start hunting from different rooms. Because Decoy Twin also has the ability to initiate hunt.

Obake
When Obake interacts with a valid surface, it does not creating a fingerprint with a 25% chance.

It also leaves a unique fingerprint with a 16.7% chance:

Obake can reduce the remaining extinction time for existing fingerprints by half and use it over and over again on the same fingerprint. This can cause a fingerprint to disappear after a very short time.

Mimic
Mimic can imitate another type of ghost with all its features:

The Mimic will change the ghost type that it chooses to imitate every 30 seconds to 2 minutes.

Mimic is the only ghost who can give 3 proofs in Nightmare game mode and 4 in other modes. 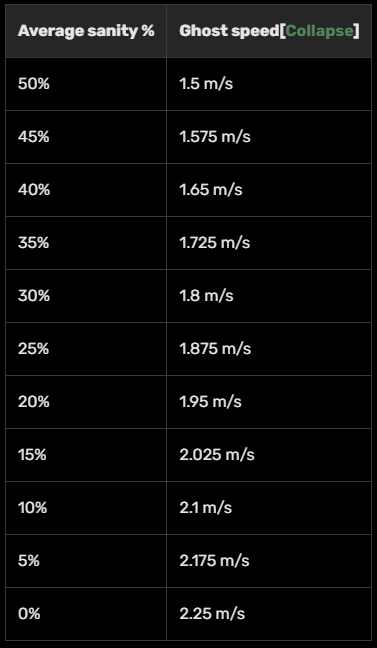 Moroi gains speed relative to average sanity. At the same time, its speed increases when chasing someone during the hunt. Its maximum speed can reach up to 3.71 m/s.

Moroi curses the player if a player heard a voice using a spirit box or with a parabolic microphone. The cursed player’s passive sanity drain drop rate doubles. Standing in the light does not prevent this, and sanity drain continues to decline. If he takes a Sanity Pills, this curse will be gone by the time he hears a voice again.

When the smudge stick is used during the hunt, Moroi cannot see and kill players for 12 seconds, unlike other ghosts. For other ghosts, this is 6 seconds.

If you use the Spirit Box while standing within 1 metre of the Deogen, you will hear his breathing, instead of getting an answer.

Deogen can see everyone and moves towards the player who is closest to him at the beginning of the hunt. If the target is away from 6 meters, Deogen moves with 3 m/s. When it approaches its target (<2.5 meters), it slows down to 0.4 m/s. Hiding is not a choice.

In addition, while blinking during the hunt, it remains visible for a much longer time than other ghosts.

Thaye
Thaye is more likely to interact with the D.O.T.S Projector and Ghost Writing Book.

Thaye every 1 to 2 minutes, attempts to age. If there is a player nearby or in his room, They will age. If not, Thaye waits another 30 seconds. They can age 10 times during the game. (This aging can be traced from the Ouija Board.)

Thaye‘s speed does not increase when chasing someone during the hunt.